Iraqi 'Most-Wanted' Deck of Playing Cards!
Scroll down to purchase your Iraq most wanted cards
Guaranteed made in the USA HOYLE™ Product 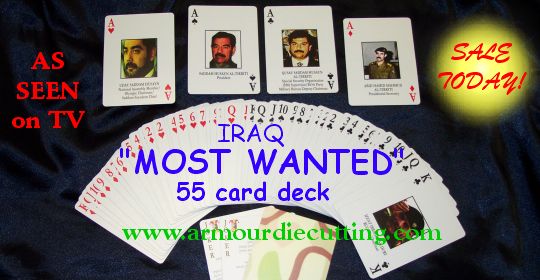 This is a real deck of cards
This is a full deck of cards which feature the top "most wanted"
leaders of the Saddam regime leaders and associates of the regime
of war criminals that tortured and killed their own people.
Who knows, maybe Saddam and Osama were in on the 9/11 attack together.
This is where to buy the faithful reproduction of the
original Iraq decks of 55 cards presented to Centcom and the Kuwait Embassy.
This excellent quality 55 card deck manufactured by the United States
Playing Card Company includes all 52 wanted Iraqi personalities, plus the
two Jokers featuring the famous HOYLE™ Joker, and the Camo card with camo back.
These cards are suitable for all card games.
How to buy the most wanted high quality cards that
everyone is going wild over, just
click the add to cart buttons below to order! 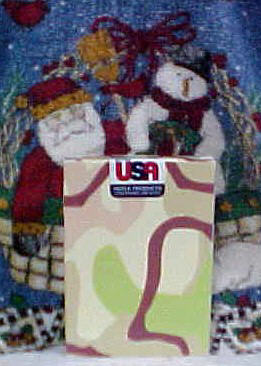 Credit card transactions are the fastest, safest way to get you items!

All of these people have been captured or are dead
Here is a run down of each card in the above decks for sale:
The cards listed RED are dead or in custody as of 9/11/2003.

Thank You for Visiting Our Sale!